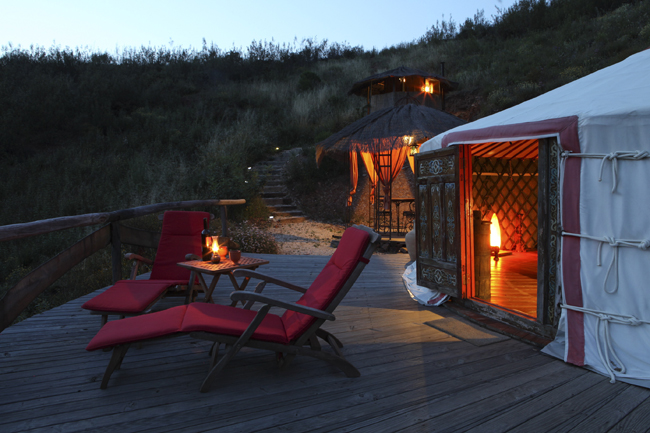 Once upon a time, about fourteen yeas ago, I had a dream. The dream was clear in some aspects, turbid in others. It was about living in close contact with Nature, in Freedom. It was about Peace and Silence. It was about building up a simple life where we could survive.

And so we set out, young, in a certain way naive, or maybe confident is a more appropriate adjective. We drove with our van direction south, with little savings and no other aim than to find a small piece of land where this would be possible.

The journey, for the mere practical reason that it was a country where GPL was easily available, as opposed to Spain, took us to Portugal. We had no clue how to look for land with such a small budget, and it was this somehow aimless wandering that led us to the south, where we got fed up with our passive looking, stopped at the first sign saying “land for sale”, walked in and met a Portuguese guy who was having a beer in that informal bar.

The guy knew a guy who knew people who were selling land. We were brought to Brejeira, the hill that welcomed us arms wide open, with a view so vast that it seemed to tell us that the sky was the limit. We did not think, did not investigate, did not plan (hence the naivety). We were eager and we could finally afford it, so the sum seemed clear, against everybody’s advice.

That is where the real adventure started. There was nothing: no water, no electricity, no house or ruin. A mere six hectares of Nature, grand, quirky and steep, with its inhabitants. Again, there was no plan. We simply set out to slowly make it livable and lived by the day. Water (and lucky were we that there actually was a source on the land!), shade, electricity…Step by step, with kilo’s patience, liters sweat, blood and tears, we started laying the first bricks of our dream, that took form only during the process.

It was a journey, a never ending journey. The journey unfolded itself as we walked, and even that was not a conscious choice. Many times we fell, screamed and cried, but there was no other choice than to get up again.

When we needed income, and working full time for others at very low wages made neither of us happy, we decided to rent out our own Yurt. Joining our creative forces, Sander’s growing dedication in the building process, with love, always with love, and my more down-to earth approach, Eco-lodge Brejeira was born: a little piece of heaven where people could reconnect with Nature, with each other, with themselves.

We had no clue about anything, not during the building, not in marketing or running a business. We just did it, and learnt by trial and error. Maybe we were lucky, maybe it was the passion during the process that was rewarded. But it was a sweet gift that we could live gently off the generated income.

Kids were born, guests came and went, and sometimes came back, and left again…and we lived happily ever after.

We did, oh yes we did. Until, on the night of august 6th of last year, destiny (or was it simply time for a new dream?) sent the bush fires to our valley, destroying everything on its way. Eco-lodge Brejeira died, our work of the last decade was eradicated, not a stone left of it. Our income gone, our dream annihilated.

The pages are blank again, and can be filled with new dreams.